One of the most persistent and powerful methods used to beat baccarat has been to use the knowledge of the rank of exactly one card in the shoe, (see this post). A "known-card" AP patiently counts down the shoe until their card reaches the window where it is eligible to be dealt in the following round, that is, the card is one of the next six in the shoe. The AP then follows a fixed baccarat strategy that tells him which wager to make to take full advantage of this information.

One procedure that can lead to an exposed card is known as the “ribbon spread.” Bill Zender explains the ribbon spread as follows:

“The dealer will remove approximately 20 to 25 cards from the front of the eight decks following the cut. The dealer will spread the cards face down on the layout, and starting from the dealer’s left count each card. Once the dealer locates the 14-th card, he/she places the plastic cut card between the 14-th and 15-th. The entire spread of card are picked up in order and placed behind the eight decks.”

The point is that when the cards are removed from the shoe to be spread, the back card of the shoe may be exposed. This exposure is the key. First, the rank of the exposed card is noted by the AP. The AP then visually counts out the exact number of cards that were removed from the back of the shoe and spread. By subtracting this number from 416 (eight decks), the AP knows the exact location of the exposed card. For example, if a Seven of Clubs was exposed and 22 cards were spread then the AP knows that "a Seven is the 394-th card."

It recently came to my attention that APs are engaged in using "known-carding" against the Dragon 7 (Fortune 7) and Panda 8 baccarat side bets. That makes sense. After all, if an AP is going to go through all the trouble to track a single card through a shoe, he may as well get whatever additional value he can from that knowledge. This post gives the edge for known-carding the Dragon 7 and Panda 8 side bets, based on the known card and its location in the six-card window. As will be evident, there are several situations when the AP can get a substantial edge.

The following table gives the edge for the Dragon 7 side bet based on the known card and its location in the six-card window: 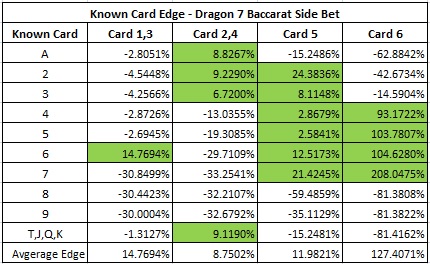 The AP should make the Dragon 7 side bet in the following situations:

Overall, if the AP makes a Dragon 7 wager precisely when he has a known-card edge, then his average edge will be 29.3343%.

Note the incredible edge possible when a 4, 5, 6 or 7 is the sixth card in the window. The reason for these extremes is that 4, 5, 6, 7 are premium drawing cards for the Banker hand to end with a three-card total of 7. On the other hand, it is impossible to get a three-card Banker total of 7 by drawing an 8, 9, T, J, Q, K. 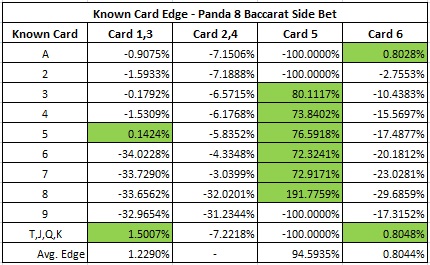 The AP should make the Panda 8 side bet in the following situations:

Overall, if the AP makes a Panda 8 wager precisely when he has a known-card edge, then his average edge will be 28.8035%.

Side bets often have severely restricted maximum wagers. It is very unlikely that known-card play against the Dragon 7 and Panda 8 will take place on a table with a $25 maximum. Internationally, however, much higher limits can be found on these side bets. 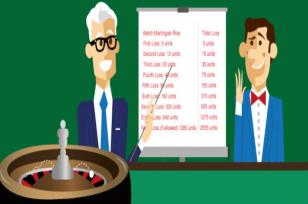 7 Tips to Avoid Rookie Mistakes at the Casino

8 Tips on How to Win at Baccarat 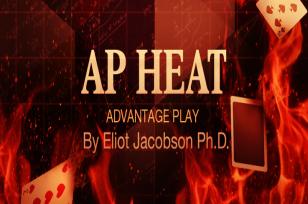 A Baccarat Side Bet with a 10.32% Off-the-Top Player Edge