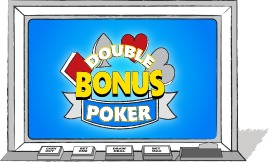 All of these factors combine to make Double Bonus Poker one of the more popular video poker games. What more could a live casino or online video poker player want? 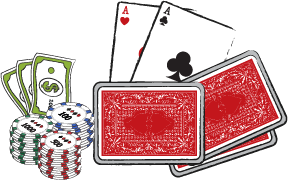 The full pay version was originally commonly referred to as 10/7, referencing the 10 for one pay for a full house and seven for one pay for a flush. However, casinos started modifying the pay table in order to add to the house edge. They lowered the pay for a straight to four for one from the full pay amount of five for one. This became so common that, now, in order to differentiate the true full pay Double Bonus Poker from a short pay variant, the full pay version is referred to as 10/7/5. The return of a 10/7/5 Double Bonus Poker game with perfect play is 100.17 percent.

As you may have guessed, as players got smarter with their play and more of them hammered the 100+ percent full pay games, the casinos responded by reducing most of their Double Bonus games to either 9/7/5 with a return of 99.11 percent or 10/7/4 with a return of 98.81 percent. As a result, full pay versions of Double Bonus Poker have become more and more difficult to locate. A short pay 9/7/5 (nine for one paid for a full house, seven for one paid for a flush, and five for one paid for a straight) version is more common, paying 99.10 percent with perfect play.

Surprising as it may seem, the strategies for the 10/7/5 and the 9/7/5 versions of the game vary only slightly. In fact there is only one strategy play that is different between the two. Because of this, the strategy table that follows has been designed to incorporate strategies for both of these games. This should help players as they only need to learn and possibly carry one strategy chart to play both games.

Because more of the overall return is concentrated in the much higher paying four of a kind hands, the variance for Double Bonus Poker is higher than any previously discussed game except Bonus Poker Deluxe. As you have learned, higher variance is not a problem in and of itself. As long as you have a sufficient bankroll to ride out the dry spells that will occur, high variance games should not be a problem. With the proper bankroll and proper practice with this strategy, Double Bonus Poker can be a great game for you to play. Plenty of large pays from four of a kind hands and a positive return expectation on the full pay version of this game make for lots of fun and excitement.

As you have seen from the previous strategy chart, when the only change to the Double Bonus Poker pay table is a one credit reduction of the pay for a full house, the strategies for the two different pay tables are almost identical. Now let’s look at the 10/7/4 short pay version of Double Bonus Poker. In this case the only change to the pay table is the reduction by one credit of the pay for a straight.

Notice from the pay tables that the return for the 10/7/4 version is only 98.81 rather than the 99.11 return for the 9/7/5 version of the game. Because a straight occurs much more frequently than a full house, the impact of lowering its pay is much more dramatic. Also, because of this, the playing strategy is significantly different than for either of the other two pay tables.

In order to test your understanding of how to use the strategy charts, see if you can properly play the following hands based on the strategy for the 9/7/5 short pay version of Double Bonus Poker. This version is used in the test because the full pay version is not all that common in live casinos or online casinos any more. Decide which of the cards in each hand below you would hold (if any). 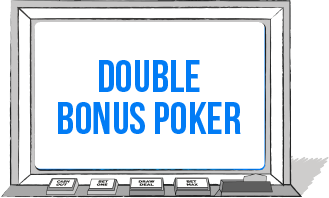