Which of the following statements about blackjack is true?

When players have a losing session at blackjack, they are quick to put the blame on someone or something. They would never consider that their losses may be due to the fact that they haven't a clue about basic playing strategies or their loss is simply due to the variability that is part of how to play blackjack (the latter means that even the most skillful players will have losing sessions). It just makes more sense to blame that nerd at third base who, allegedly, killed the table with his stupid plays. If you are serious about wanting to win at blackjack, then the very first thing you absolutely must do is to separate the truth from fiction; otherwise, you will be like most blackjack players, who always have an excuse for their losses. I could write many pages of blackjack myths that have come to my attention over the past 50 years. Instead, I've selected the most talked about and misunderstood myths about the game, the reason for the myth, and the truth. Are you ready for some debunking?

Note: I’ve covered some of these myths in earlier chapters but it doesn’t hurt to discuss them again.

MYTH #1: THE OBJECTIVE OF BLACKJACK IS TO GET AS CLOSE AS POSSIBLE TO 21.

The Reason: Some authors and casino marketing folks try to over-simplify the objective of the game.

The Truth: The objective is to beat the dealer by either 1) having a higher final total than the dealer, or 2) not busting before the dealer busts. Those are the only two ways you can beat the dealer's hand. It is not to get as close to 21 as possible, if you always try to do the latter, you'll be broke before the end of the day. 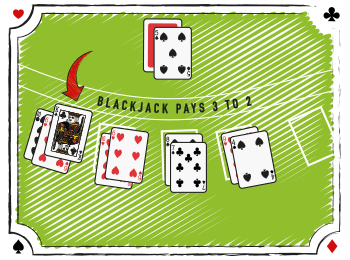 MYTH #2: THAT THIRD BASE PLAYER IS KILLING ME.

The Reason: The dealer shows a weak 5 up card and all the players, including you, make the right play and stand on all stiff totals. The third baseman, who is the last player to act before the dealer, ponders whether to hit or stand on 16. He hits, the dealer gives him a picture card, and then the dealer flips a 10 in the hole and draws a 6 to her 15 for a 21, beating everyone. Oh, how you would like to strangle the third base player! If the dummy would have stood like he was supposed to, the dealer would have gotten the picture card instead and broken, and everyone would have won. Don't tell me bad players don't affect whether or not I win or lose.

The Truth: It's absolutely true that dumb plays made by dumb players can affect the outcome of a hand for everyone else. But it has been proven mathematically that it is just as likely that a dumb play could result in the entire table’s winning. Had the two hit cards been reversed, the player in the above example could have just as easily gotten the 6, leaving the picture card for the dealer to bust. While dumb plays can upset smart players, they have no mathematical long-term effect on a player's expected outcome. You always curse the stupid player that caused you to lose, but do you ever congratulate him when his stupid play causes you to win? If the terrible play of others affects you emotionally so that you start to make playing mistakes, then my advice is to leave the table and play elsewhere. 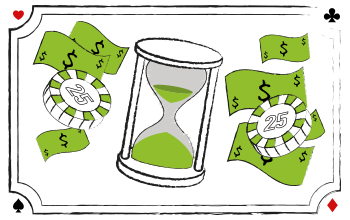 The Reason: The dealer has won five hands in a row. Blackjack is an even game, so my chances of winning the next hand are good. I'll bet up to recoup my losses.


The Truth: The cards don't give a flip that you have lost the last five hands in a row. In fact, the chances of your winning the next hand are independent of whether you lost, tied, or won the last five hands. Yes, eventually, the number of hands you will win will be around 48 percent, but “eventually” implies a long time. Over the short haul, such as a few hours of play, don't bet that you are due to win based upon what has just occurred. 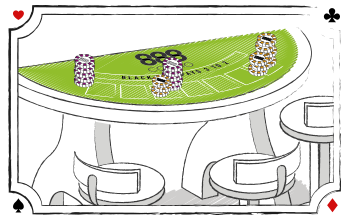 MYTH #4: PLAY AT TABLES WHERE THE DEALER IS COLD.

The Reason: It’s a fact that sometimes you will lose hand after hand to a dealer who consistently outdraws you by one point, while other times, you seem to have a friendly dealer who obligingly busts on every hand, resulting in many wins for you. So most players reason it’s best to play on a table with a “cold” dealer rather than with one who is “hot.”

The Truth: We all know that blackjack dealers sometimes get lucky and can do no wrong and beat you no matter what you hold. Although it’s easy to tell if the dealer is hot or cold right this minute, what you can’t predict is whether or not she will be hot or cold in the future. That’s because the cards don’t know, and quite frankly don’t care, what has happened in the past. Just because you lost the last five hands in a row, doesn’t mean you are more likely to win the next hand. So, likewise, picking tables where the dealer seems cold is a waste of time. 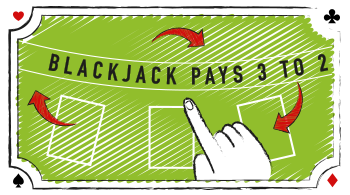 MYTH #5: A NEW PLAYER ENTERING MID-SHOE WILL CHANGE THE ORDER OF THE CARDS AND CAUSE YOU TO LOSE.

The Reason: Players remember when they were enjoying a winning streak and then Mary Clueless jumps into the game mid-shoe, adds another hand to the round, and the dealer starts killing everyone. It’s got to be her fault!

The Truth: When players’ fortunes turn from good to bad, they need a scapegoat to blame their losses. There was nothing sacred about the number of hands being dealt before poor Mary jumped in and started to play. In fact, there was no guarantee that you would have continued to win if she didn’t enter the game. Changing the order of the cards doesn’t matter one iota. 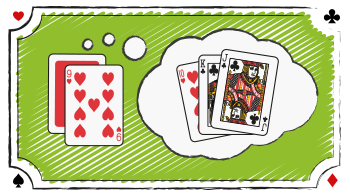 The Reason: Since there are more ranked cards in a deck that count 10 in blackjack (the tens, jacks, queen, and kings), players often assume that the dealer always will have a 10 in the hole, and are often advised to play their hand accordingly.

The Truth: There are 16 cards out of 52 in a deck that have a value of 10. That means only about 31% of the time will she have a 10 in the hole, while 69% of the time, she will have some other card in the hole. Playing your hands with the assumption that the “dealer has a 10 in the hole” will lead to very costly playing mistakes. Instead, you need to play your hands by the basic playing strategy because it factors all the possible cards that could be in the dealer’s hole, how often she will get each card, what cards she could get if she hit again, and how often you’ll get each of the cards when you hit. 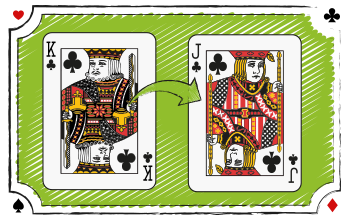 The Reason: Players who just saw a face card will refuse to hit their stiff hands because they believe that a face card always follows another face card.

The Truth: If anything, the opposite is true. Once you’ve seen a face card the chance that the next card is a face card actually decreases because one of the face cards has just been removed. When you have a stiff hand, simply follow the basic playing strategy and ignore the nonsense that pictures always follow pictures.

The Reason: Many players believe that a betting progression, such as a positive progression where you increase your bet following a win and decrease following a loss, will take advantage of streaks of wins and leave you with a net profit.

MYTH #9: IT’S IMPOSSIBLE TO WIN AT BLACKJACK BECAUSE IT IS A GAME OF LUCK.

The Reason: Most players believe that casinos have the mathematical advantage in all gambling games, so to win requires luck.

The Truth: There is luck involved when you play blackjack but overriding the luck is the skill of the player. You have to make playing decisions on the hands that will be dealt to you, and your decisions will affect the outcome of the hand. And learning card counting (coming in Chapter 10) will allow you to have the mathematical advantage over the casino. Players’ being able to gain the long-term edge by playing skillfully is what separates blackjack from most other casino games where luck is the only factor that determines the outcome.

MYTH #10: ALWAYS INSURE YOUR GOOD HANDS AGAINST A DEALER'S ACE.

The Reason: If the dealer ends up with a blackjack, you can avoid losing money on your good hand by insuring it.

The Truth: Casinos encourage players to insure their good hands against a dealer’s blackjack. But in fact, when you have a good hand it’s the worst possible time to take insurance. For example, assume you have a 20. You are holding two 10-value cards that the dealer needs in order for you to win your insurance bet (remember you win your insurance bet only when the dealer's hole card is a ten-value card, giving her a blackjack hand.) Because you have two of the cards she needs for a blackjack, the odds of her getting a blackjack are worse. Your 20 has an excellent chance of winning; don't mess it up by taking insurance (translation: don't make a bad bet to protect a good bet). 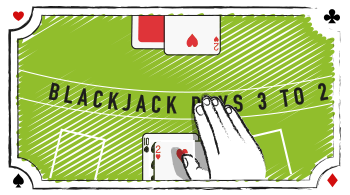 MYTH #11: NEVER HIT A 12 AGAINST A DEALER'S 2 UPCARD BECAUSE YOU WILL INVARIABLY DRAW A 10 AND BUST.

The Reason: More often than not, players will draw a 10 when they hit a 12 against a dealer's 2 or 3. They figure if they would have stood and the dealer's downcard were a 10, the dealer would have had to hit his 12, caught the 10 and broken. Instead of losing the hand, they would have won. 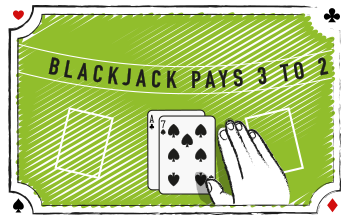 The Truth: A soft 18 is a good hand when the dealer shows a 2 or 7 up card. But against a dealer's weak up card of 3, 4, 5, or 6, the better play to make is to double down. You do it not to improve your position, but to put more money on the table when the dealer is most vulnerable to busting. You 18 is a loser against a dealer’s 9, 10, and ace but you will lose less in the long run by hitting, in those instances where basic strategy states to hit. 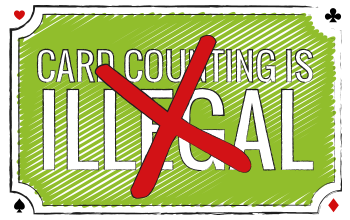 The Reason: The public learns from various media outlets that card counters get thrown out of the casinos, or, worse, taken to the “backroom” and beaten.

The Truth: Using your brains when you play blackjack is not illegal, and as you will learn in Chapter 10, card counting is nothing more than using your brains to track specific cards as they are played. The casinos would much rather have players that know how to lose rather than players that know how to win sitting at their blackjack tables. I’ll address this issue of casinos and card counting in more detail in Chapter 10, but for now, just remember that there is nothing illegal about card counting.

MYTH #14: YOU HAVE TO HAVE A PHOTOGRAPHIC MEMORY TO COUNT CARDS.

The Reason: The Hollywood movie Rain Man helps perpetuate this myth. The public mistakenly believes that card counting involves memorizing every card being dealt, as actor Dustin Hoffman did in the character he portrayed in Rain Man, a feat that requires a photographic memory.

The Truth: Traditional card counting does not — let me repeat that one more time so it is clear — does not require a photographic memory. You’ll learn how card counting actually works in Chapter 10.

Which of the following statements about blackjack is true (T) or a myth (M).

All of the above are myths except #12.