After you already know how to play blackjack, it’s important to “scout” the blackjack tables in a casino before you sit down and play. That’s because most casinos nowadays often have a different mix of rules, number of decks, and shuffling procedures from one blackjack table to the next.


Because of this, you need to:

SEARCHING FOR THE BEST BLACKJACK TABLE: WHAT TO LOOK FOR​ 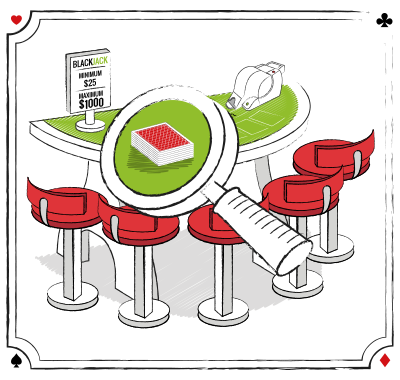 WHEN YOU ENTER A CASINO YOU SHOULD SCOUT THE BLACKJACK TABLES TO DETERMINE: 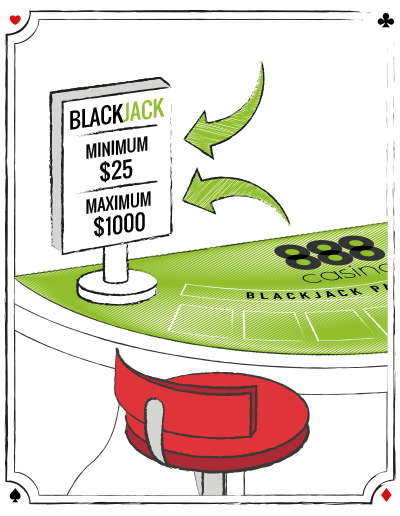 The betting limits aren’t going to change your playing strategies. However, the reason you should check what the betting limits are before you buy in and make your first bet is to avoid the embarrassing situation of not betting at least the table minimum. Think this doesn’t happen? I’ve seen this scenario numerous times during my playing career. A player sits down, places a wad of bills on the layout, and asks the dealer for chips. Play is stopped while the dealer spreads the cash on the layout, counts it, counts out the equivalent amount of chips, and then slides the stack of chips to the player.

Sometimes the dealer has to wait to get the approval from the floor supervisor before she can give the chips to the new player, who then proceeds to slide two red chips ($10) in his betting spot while fellow players raise their eyebrows in disgust. The dealer then announces to the new player, “Sir, the minimum bet on this table is $25,” while pointing to the placard sitting just to the dealer’s right that summarizes the betting limits and rules. Usually, the player will sheepishly remove his two red chips, pick up the rest of his stack of chips, and without saying a word, leave the table embarrassed at what just transpired. Therefore, rule number #1 is to known the betting limits on the blackjack table before you sit down and play. 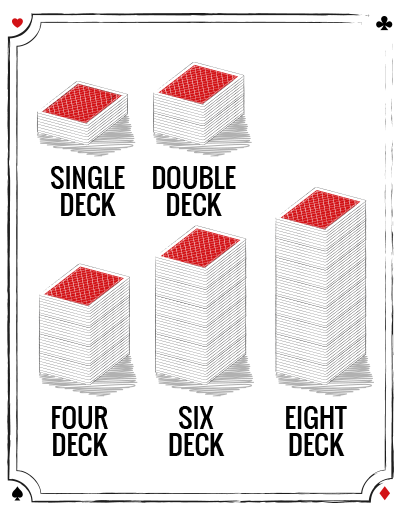 Usually, the cards in a multi-deck game are dealt from a dealing shoe. With a little experience, you’ll be able to tell when the dealer shuffles the cards or by looking at the sideways stack of cards in the dealing shoe immediately after a shuffle if the game is using four, six, or eight decks; however, if you are not sure, just ask the dealer. 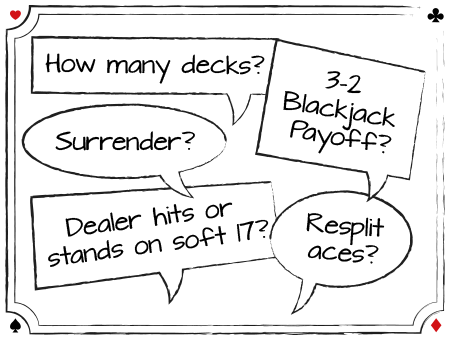 This is where the rubber meets the road. It’s the mix of playing rules, along with the number of decks of cards, that will determine the house edge against you.

It’s important that you know whether the rules on a particular blackjack table require that the dealer stand on soft 17 or must hit soft 17; whether you can double down on any two initially dealt cards or if there are restrictions on what hands you can double; whether surrender is allowed; whether re-splitting of aces is allowed; and, most importantly, what the payoff is for an untied blackjack (is it 3-2, 6-5, 7-5, or even money). I’ll cover the importance of playing rules in more detail in the next section. 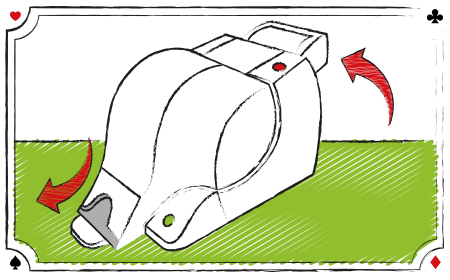 HOW THE CARDS ARE SHUFFLED

If the game is dealt with a single- or double-deck of cards, the dealer will usually hand shuffle the cards and there is no issue here. With a multi-deck game, dealers will either shuffle the multiple-decks manually, although this is time consuming, or via an auto shuffler. There are several different kinds of auto shufflers and the one you want to avoid is the Continuous Shuffling Machine (or CSM). The reason for this is important so stay with me while I explain how each shuffler works.

Automatic blackjack shufflers have been around a long time in casinos. Usually a casino will use two sets of multiple decks of cards on a blackjack table. While one set of cards is being used by the dealer on the game, the other set is being shuffled offline by the automatic shuffler. When the cut card appears, the round is completed and then the dealer will swap the cards; meaning, the just-used multi-decks will be placed in the automatic shuffler (to be shuffled) while the shuffled decks that were in the machine (offline) are put into play by the dealer for the next rounds. The purpose of using two automatic shufflers is to eliminate the wasted time involved in having the dealer manually shuffle the cards. (From the casino’s perspective, time is money, and when their dealers are manually shuffling multi-decks of cards, the number of hands dealt per hour decreases compared to when the cards are shuffled by an automatic shuffler.)

The odds against the player in blackjack do not change when an automatic shuffler is used to shuffle the multi-decks. If the casino were using, say, six decks of cards, they will usually deal about 65 to 80% of the cards and then reshuffle all six decks using the auto shuffler.

A CSM, on the other hand, is a combination automatic shuffler and dealing shoe. Casinos usually place five decks of cards into the CSM. After a betting round is completed, the dealer will scoop up the just played cards (i.e., the discards), and instead of placing them into a discard tray, she will insert them back into the CSM where they are randomly shuffled with the remaining (roughly 4.5) decks of cards.

Do you see the difference between a CSM and an automatic shuffler? With the latter most of the cards are played (ca. 65 to 80%) before the discards and unplayed cards are shuffled together. With a CSM, the discards are immediately returned to the shuffler after each round (sometimes several rounds) and randomly mixed with the unplayed cards. With a CSM, the action never stops because the dealer continuously deals the cards without pausing for shuffling.

Do the odds change against a player when a CSM is used? The answer is yes, they change very slightly in favor of the player, with the house edge against a basic strategy player reduced by about 0.1% in a typical six-deck game. The reason the CSM causes the house edge to go down ever so slightly is because of a phenomenon known as the “cut card effect,” which slightly increases the probability of getting tens and blackjack when a CSM is used.

Now before you rush out and play blackjack on a table that uses a CSM, pay attention to the rest of the story. Even though the house edge decreases slightly with a CSM, this is more than negated by the increased speed of the game. Remember with a CSM-dealt game, there is never any down time for shuffling; therefore, on average, casinos can deal about an extra round or two per hour resulting in about 15 to 20% more hands played per hour with a CSM. From the player’s perspective, the extra hands played (and bet) each hour will increase your hourly theoretical loss compared to a manually shuffled game. (Ditto for games dealt with auto shufflers.) Bottom line: If you are a basic strategy player, it’s best to play in manually-shuffled games as opposed to games dealt with CSMs and auto shufflers


“Note: The original purpose of CSMs was to eliminate card counting as an effective strategy to gain the edge over the casino. I’ll have more to say about this in Chapter 10.” 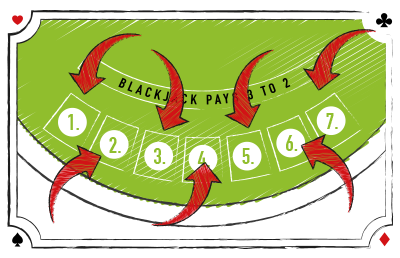 If you are not using some of the techniques I summarized in Chapter 5 (reduce house edge), the casino will have a small edge over you (that assumes you are using the basic strategy summarized in Chapter 3 accurately). Given this fact, you are better off playing at a full table rather than a table with fewer players, or worse, heads up against the dealer. The reason is you’ll get fewer hands dealt to you at a full table, which will reduce the exposure of your bankroll to the house edge. 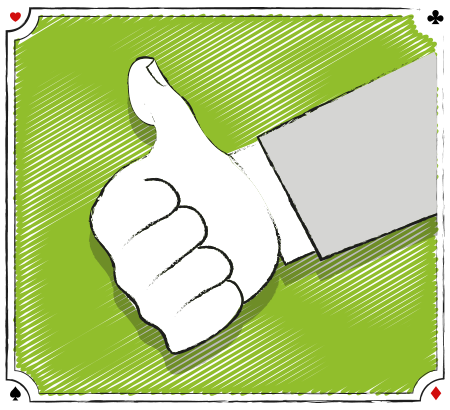 Here is a list of most of the good rules in blackjack. 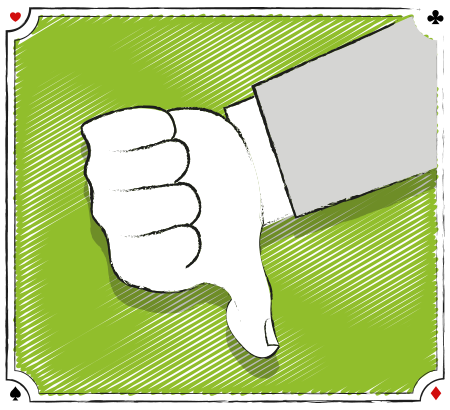 Your goal is to be sure that the blackjack game you are about to play offers mostly the good (player favorable) rules. 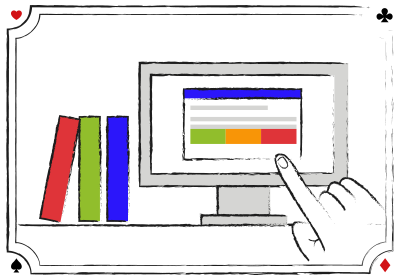 ESTIMATING THE HOUSE EDGE FOR ANY GAME

You’ll find data in blackjack books and on the Internet on how the above rules affect the house edge. There are also websites where you can key in the rules of any game and they will automatically compute the house edge. Here are some examples.

Each of the good (player favorable) and bad (player unfavorable) rule affects the basic strategy, some greater than others. The effect for any one rule, say surrender, may also be slightly different for a double-deck game vs. a six-deck game. Some rules are also more common than others. If you consult the tables in Chapter 3, I’ve summarized what the house edge is for different number of decks and mix of playing rules. Use this as a guide to determine which mix of rules is the most player favorable.

You can also refer to the tables in Chapter 3 that summarize what the house edge is for different number of decks and mix of rules to get an idea of what rules you should be looking for when you play blackjack.

Try to answer the following questions based on the information in Chapter 6.